Born in New York City in 1894, Norman Rockwell always wanted to be an artist. At age 14, Rockwell enrolled in art classes at The New York School of Art. Two years later, in 1910, he left high school to study art at The National Academy of Design. He soon transferred to The Art Students League, where he studied with Thomas Fogarty and George Bridgman. Fogarty's instruction in illustration prepared Rockwell for his first commercial commissions.

In 1916, the 22-year-old Rockwell painted his first cover for The Saturday Evening Post, the magazine considered by Rockwell to be the "greatest show window in America." Over the next 47 years, another 321 Rockwell covers would appear on the cover of the Post. The 1930s and 1940s are generally considered to be the most fruitful decades of Rockwell's career.

In 1943, inspired by President Franklin Roosevelt's address to Congress, Rockwell painted the Four Freedoms paintings. They were reproduced in four consecutive issues of The Saturday Evening Post with essays by contemporary writers. Rockwell's interpretations of Freedom of Speech, Freedom to Worship, Freedom from Want, and Freedom from Fear proved to be enormously popular. In 1977, Rockwell received the nation's highest civilian honor, the Presidential Medal. 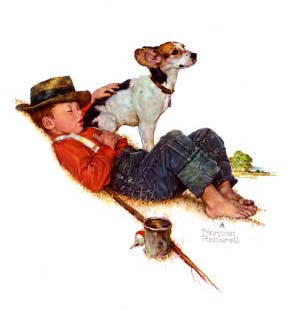 Fondly Do We Remember